Veronica Verkley is a sculptor and media artist based near Dawson City Yukon, on the traditional territory of the Trondëk Hwëchin.

Ethereal, organic and focused on animal forms and gestures, Veronica’s work shifts between installation, animation and kinetics. Parallel to her practice, Veronica has collaborated extensively in film, theatre and dance, with a focus on puppeteering and animatronics. She has recently returned to her practice full time after holding a faculty position at the Yukon School of Visual Arts for many years.

Recent exhibitions include Olga Korper (Toronto), and the Esker Foundation Project Space (Calgary); along with McMaster (Hamilton), Ottawa Art Gallery, OK Quoi? (New Brunswick), and Video Pool (Winnipeg) among others; and her work has been screened in Canada, Norway, Australia, USA and Japan.

My practice is centered around the gestures of animals and their resilience in navigating human habitats.

I work in installation, animation and kinetics, scavenging for materials from the landscape: metal, rubber, plastic, textiles. I seek out the aesthetics of industrial and cultural cast-offs foraged from the local landscape, worn, weathered and with their own secret histories, reformed into soft animal bodies.

Organic, flexible forms are assembled mostly by hand: weaving, wrapping and stitching the way animals or birds would construct their dwellings and habitats. Subtle movement is implied through pose or multiples; or actualized, with pumps or motors.

I experience living in the bush as an observational practice that informs my art practice. Every morning for the past 10 years I’ve filmed a few seconds of the view from my cabin looking south, capturing seasonal rhythms, creating a slow time-lapse of change. Over time, patterns develop, individuals appear, narratives unfold. I’m acquainted with the birds and animals whose territories I share, tracing their comings and goings, their mark-makings, nests and songs: ephemeral events witnessed, recorded and remembered.

Nature is endlessly narrating stories — we just have to be still long enough to read them. I try to bring this into my practice: a translation of what it means to be here. 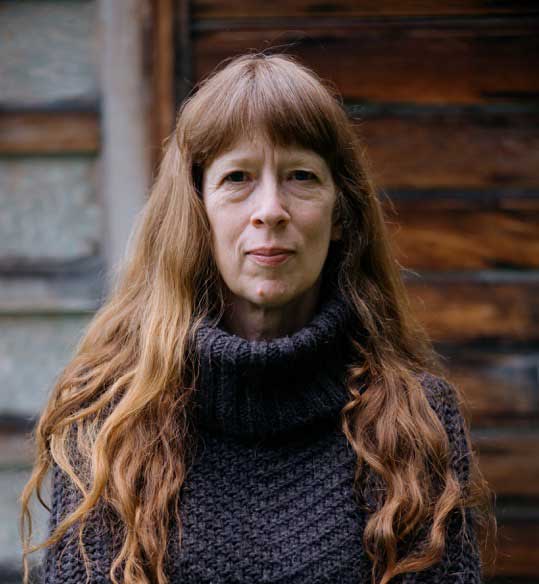 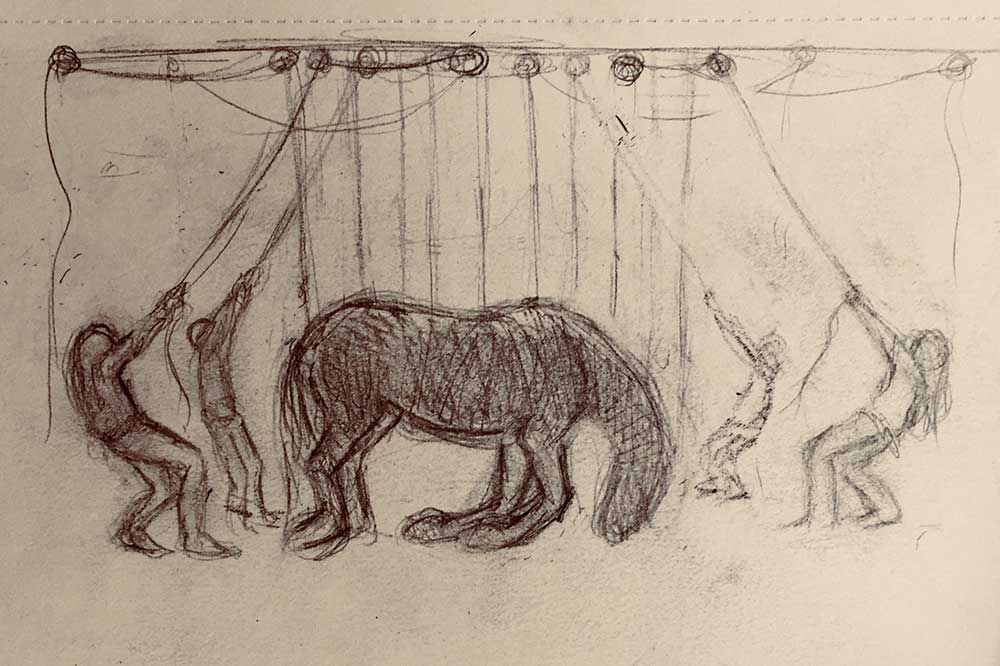 A life-sized flexible figure of a collapsed horse, suspended by ropes. It’s heavy- about as heavy as a horse. But if enough people work together to pull on the ropes & pulleys, they can get it to stand.. until they let go and it slumps back down. I want people to feel the weight of it, the responsibility of it. The movements won’t look quite right; it will be impossible to coordinate.

A post shared by Yukon Prize For Visual Arts (@yukonprize) 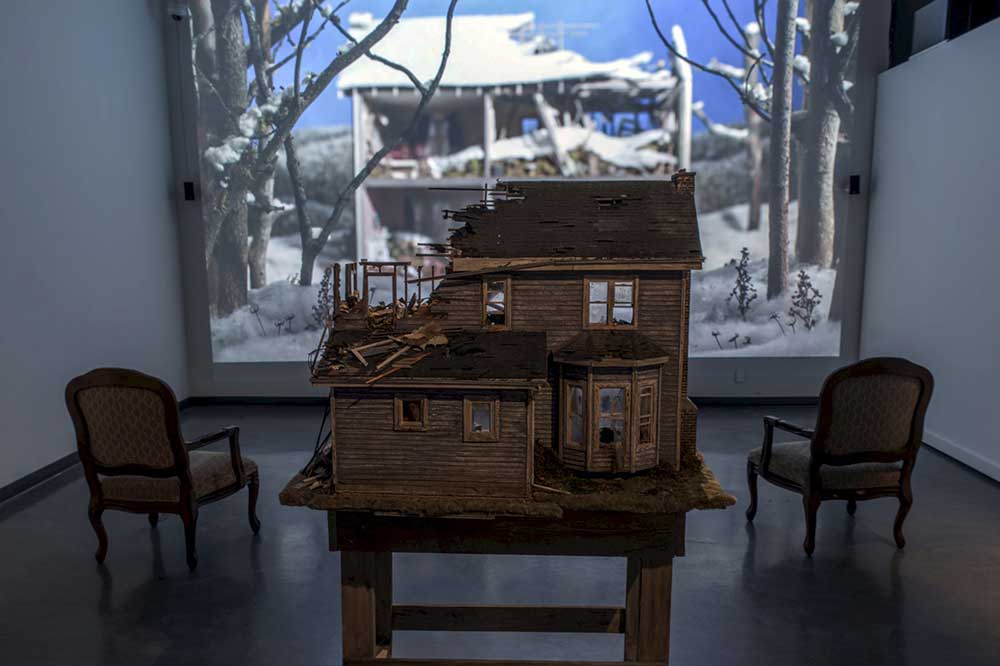 An abandoned house in the woods gradually collapses as time, nature, and the elements inevitably destroy and transform it. Its an animation shot over many months, but reads as a time-lapse shot over many years.

Changes in our environment are nearly imperceptible unless sped up as a time-lapse: then suddenly trees spring up and fall back to earth; generations of species eat, sleep & die; days, seasons & decades cycle; the very shape of the land fluctuates. Climates and ecologies falter, improvise, regenerate, flourish. Incremental shifts add up to epic transformations. Built structures eventually collapse; living systems adapt and evolve. Life is resilient. 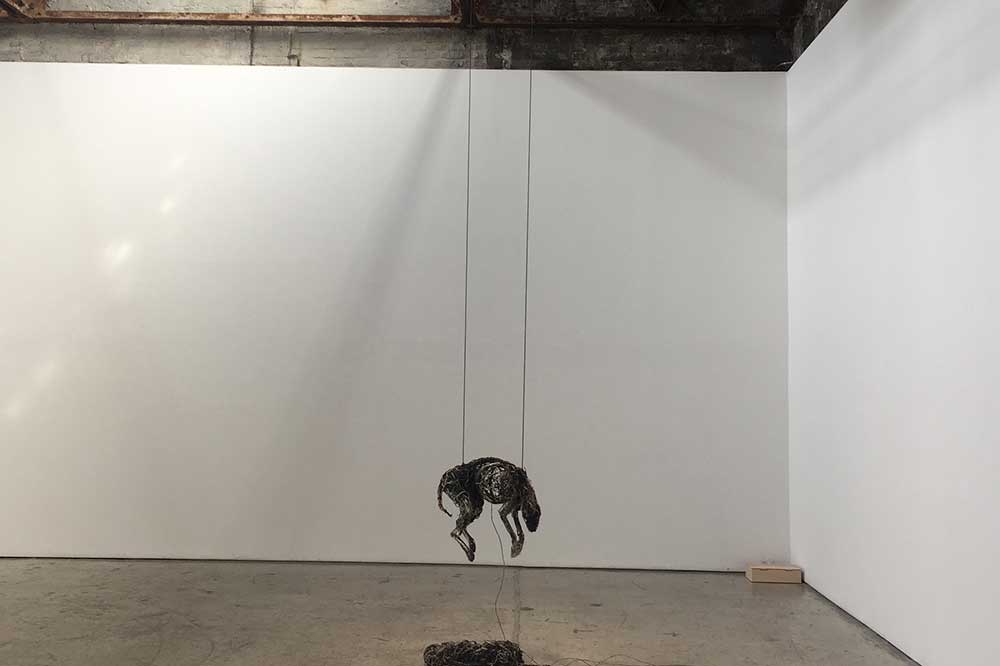 An animal thinking about itself – outside itself. The mechanics in each are similar, but the intermittent twitching reads differently in the one laying down vs the one floating. Exploring the shifting relationship between two figures, where the juxtaposition of contemporary technologies powering scavenged materials interferes with our normal comfortable responses to representations of animals.. Lying still, they can be seen simply as depictions of nature – but when they move, a state of tension arises that they might stop moving or do something unpredictable. 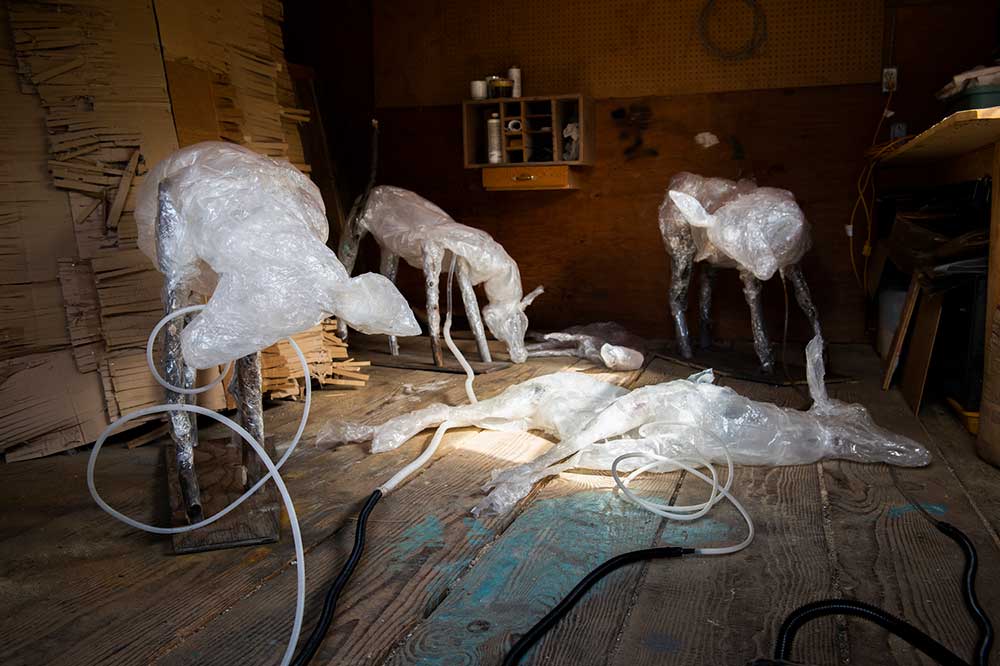 A group of animal forms built from scavenged plastic bags are brought to life when air is blown into them. Simple foot pumps operated by viewers inflate each figure individually. When the air flow/support stops, the figures slowly collapse back into themselves.

Moved by the year that was 2020, when it seemed the whole world was struggling to breathe; but it is our collective breath that unites us, and by conspiring together (con-spire = to breathe together, in-spire = to take in breath) we can support each other and pump/lift each other up. 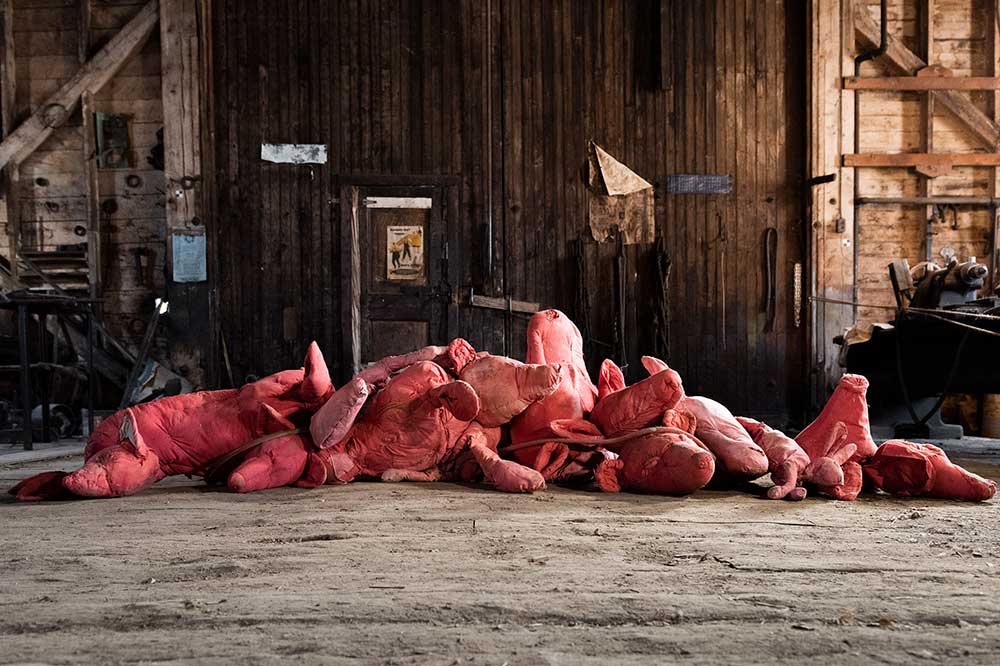 Last year near my cabin, I came across the body of a bear that had been shot, wounded & eventually died. I recognized her; I’d seen her around all summer. The conservation officer gave me the head, which I skinned and cleaned for the skull. Among my collections of such things, I also have a skull from a dog I found dead at the dump. Who remembers these discarded bodies?

Gut piles are what’s left in the bush after a successful hunt. Hide, hooves, entrails. The scavengers: ravens, small critters, all make good use of these offerings. I wanted to reassemble that bear… suture the parts back together.