Joseph Tisiga was born in 1984 and is a member of the Kaska Dena Nation. He maintains a multidisciplinary practice that is rooted in painting and drawing and includes performance, photography, sculpture and installation. His work reflects upon notions of identity and what contributes to this construct -community, nationality, family, history, location, real and imagined memories – questions that have become all the more relevant in the current climate. Tisiga’s works look at cultural and social inheritance, the mundane, the metaphysical and the mythological, often all at once and on the same surface. This conflation of interests and perspectives plays itself out in the artist’s narratives that are non-linear, cross cultural and supernatural.

My work is informed more by ephemeral qualities of living in the Yukon, than by the land or aesthetic characteristics of the geography that artists in the Yukon may typically respond to. I do not have much classical interest in landscapes or nature themes, though land and traditional concepts are present throughout my practice. Thematically I tend to continually shift reference points to reflect on subjects involving, but not limited to, the biographical, notions of ‘Indigeneity’, colonialism, art and social histories. I am motivated by an effort to contribute to the dialogue around First Nation/’Indigenous’ identity and culture, and its complex intersections to the present world.

The 3 works selected for the Yukon Prize exhibition center around my interests in assemblage and contain common themes of symbolic narrativity found in much of my work, but focus on more autobiographical qualities. The series of plaster cigarettes on astroturf text pieces, ‘Untitled Series’, and the labyrinth drawn on wall-tent canvas, ‘Dreamcatcher’, were made for a 2020 exhibition titled “A Voice Emerged From an Empty Room, the Apparition was Paralyzing”. These pieces were made in a time when I was processing the turbulent transition from Whitehorse to Montreal, and navigating the initial months of the covid pandemic.

The text for the astroturf pieces came out of notes that I took over almost a year, and are a seemingly disjointed collection of poetic or abstract statements, but provide subtext to the mental and emotional space of that time. ‘Dreamcatcher’ represents the meditative symbol of the labyrinth, drawn in pastel and oil stick on a piece of wall-tent canvas. The intersection of the aesthetics and materials held deep personal meaning in making this piece. The rainbow colouration of the drawing refers to the popular use of the rainbow throughout Quebec often pared with the phrase ‘ca va bien aller’, translated means roughly ‘it’s going to be fine’. The symbolism of the labyrinth is generally seen as a meditative, albeit meandering, line which can be walked or visually followed one moves into its center and back out again, contemplating the non-linear path of life. The connotation of the wall-tent canvas in this work refers to ‘nomadic’ living space, a home or shelter that moves with us.

The third piece is an assemblage from at 2019 series called ‘The Benevolence of Our Nomadic Ancestors; Camps, Masks and Maps’. I see this work as an Arte-Povera assemblage of costume elements from prior performance pieces, a buffalo mask of one costume paired with the jacket of the ‘Greyowl’ character, my personal shoes and pants that I wore when working. A baseball bat embedded with feathers alludes to the personification of a figure called ‘Her Nameless Majesty’ in my working cosmology. This piece entangles the biographical and mythological root of my practice, that examines the tension of finding a relationship between personal, universal and ancestral narrative space. 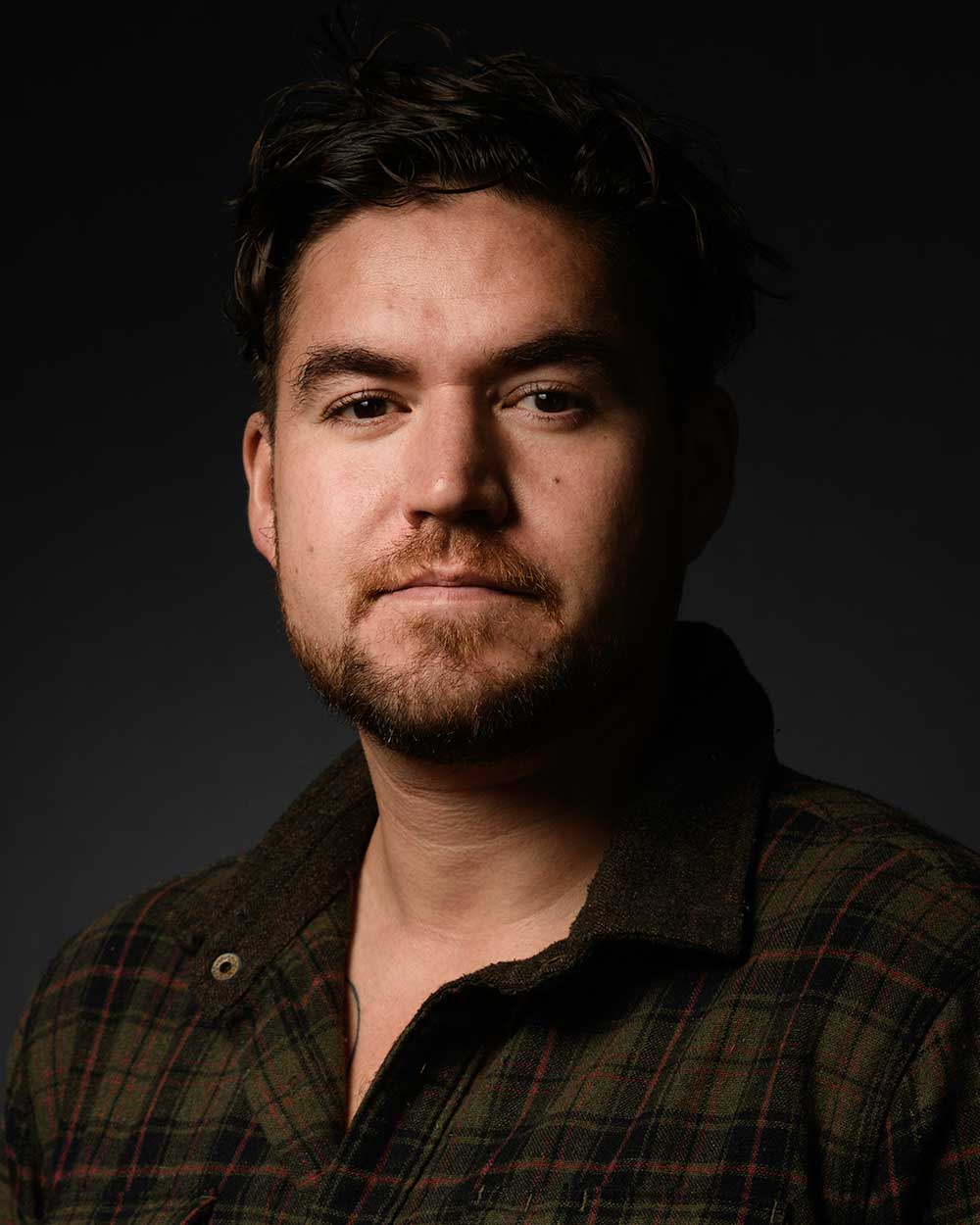 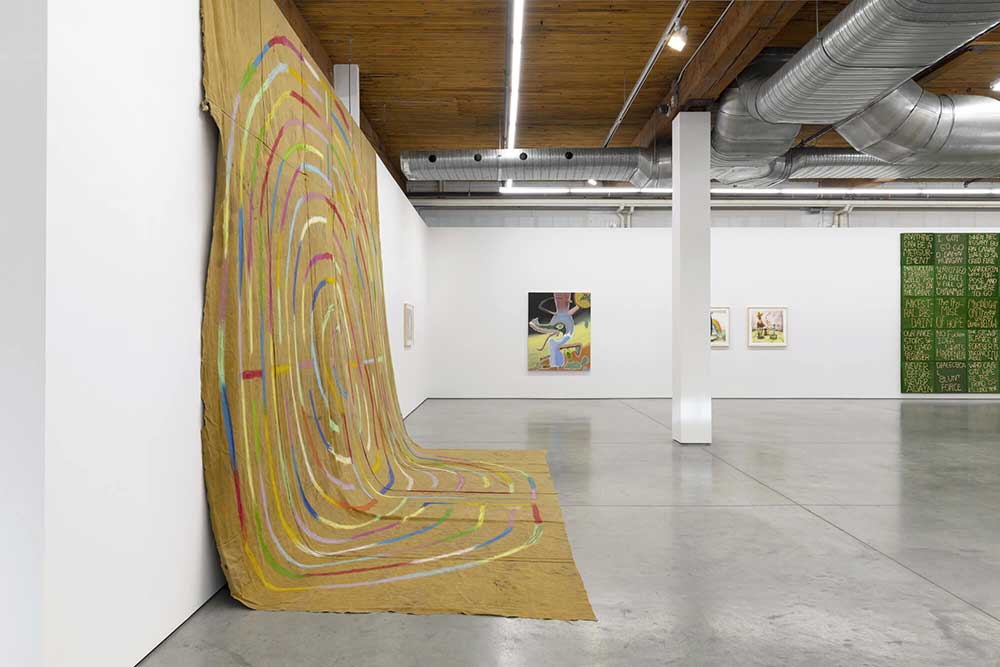 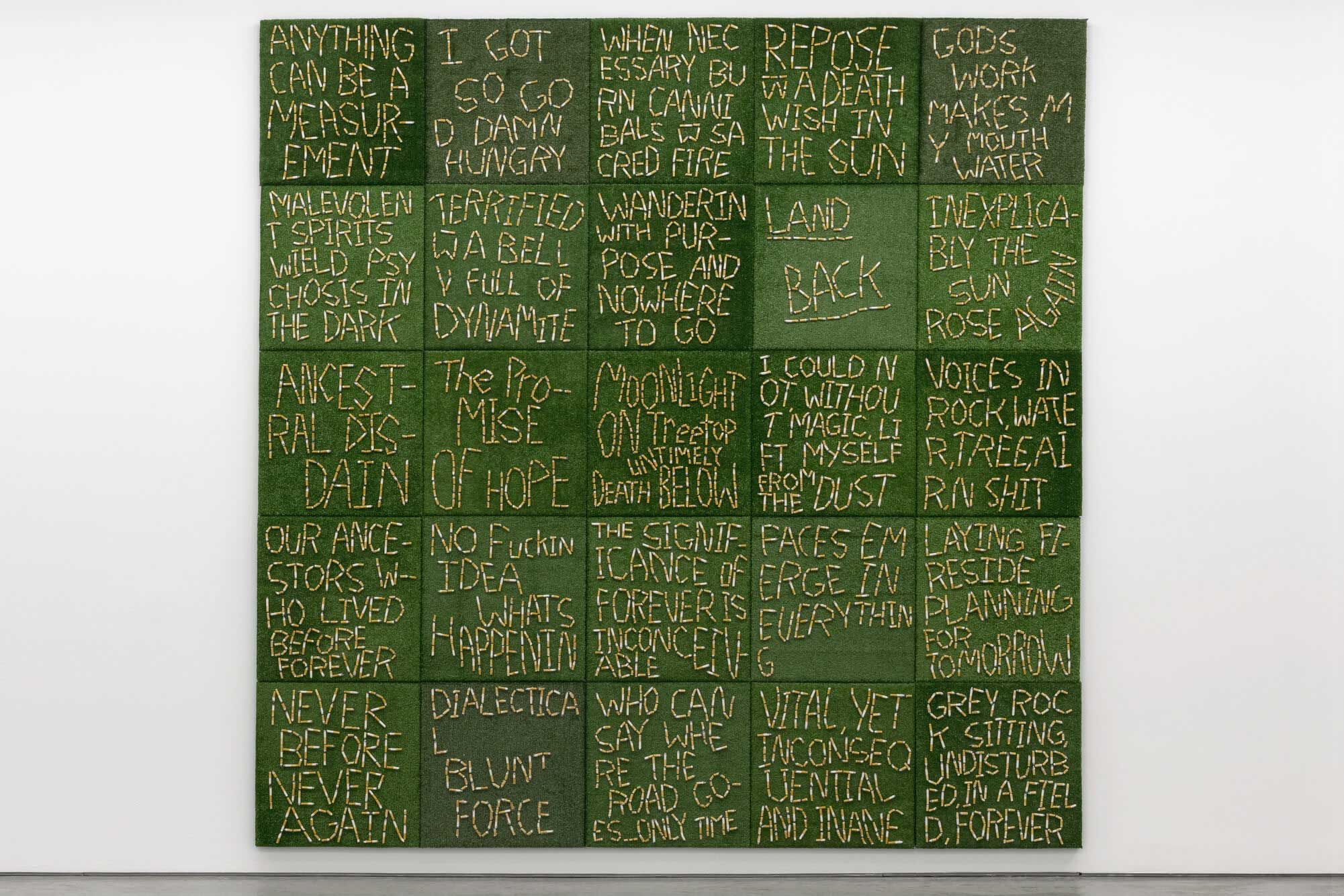 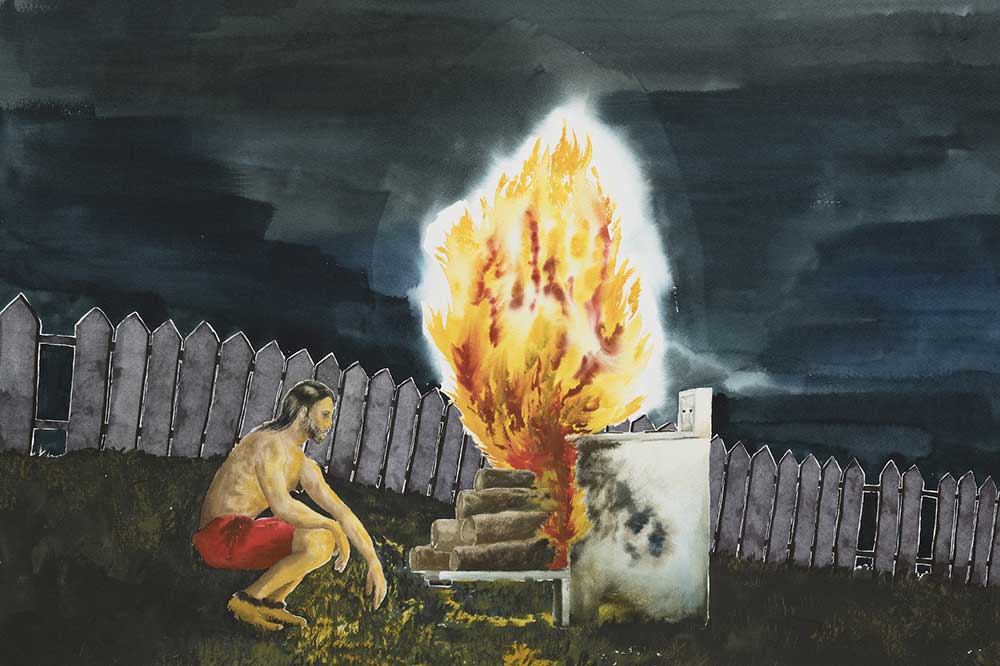 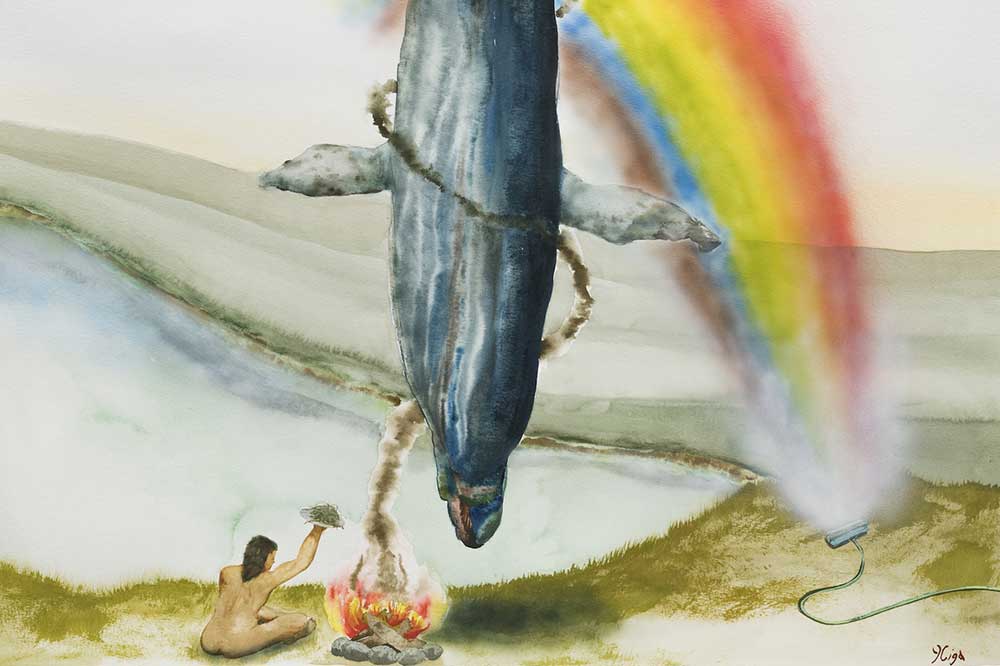 "In Lieu of Monuments Honour"

"In the Face of Peril" 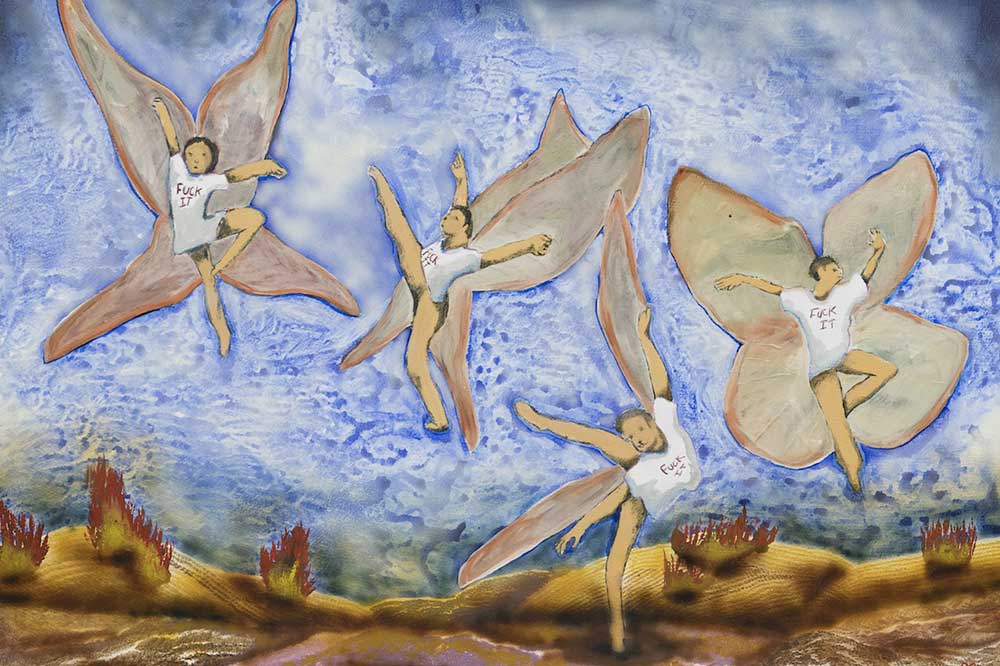 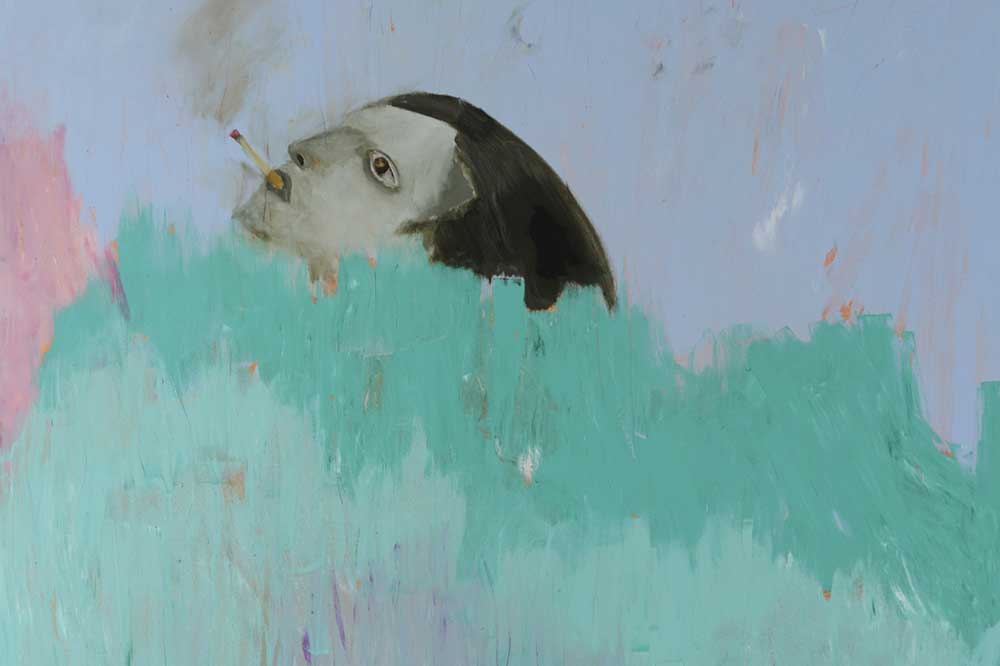 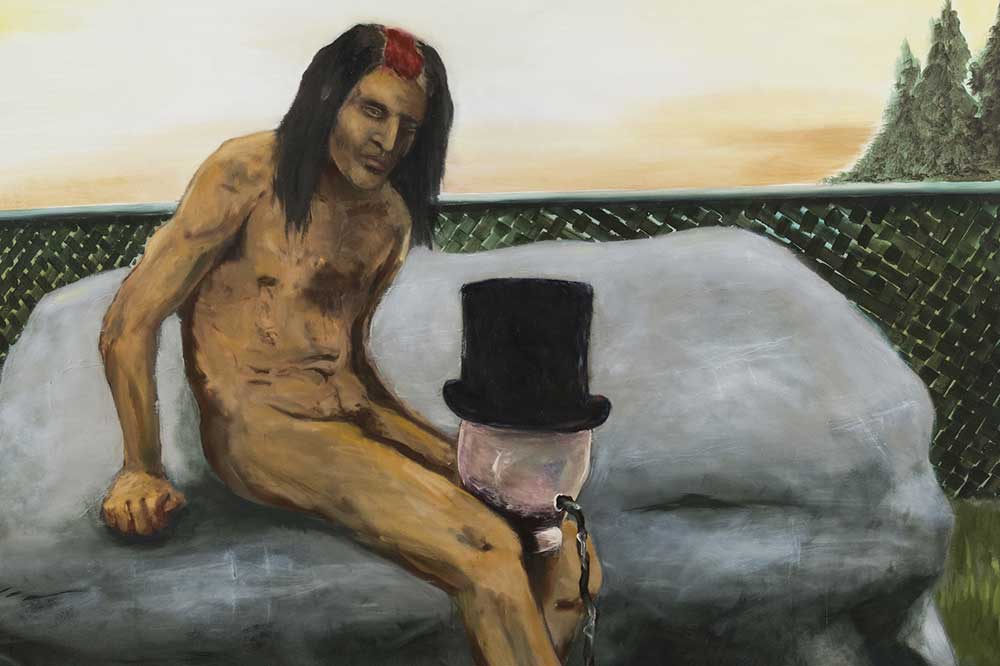